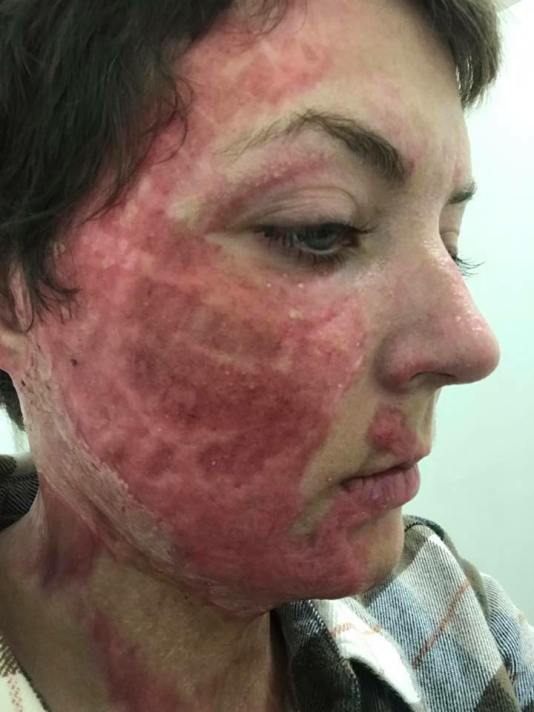 At approximately 5:10 p.m. on September 7, 2016, a Pediatric Nurse Practitioner (NP) at Ft. Leavenworth, Kansas, heard screaming from an office adjacent to hers at Munson Army Health Center. The civilian NP ran into the hallway and found 26-year-old 1LT Katie Ann Blanchard, an active duty Registered Nurse (RN) and mother of three, on fire from the waist up. (Details of the attack from the FBI Criminal Complaint, dated 8SEP16 can be found here.)

The smell of gasoline filled the hallway. The NP could see another coworker, 54-year-old Clifford Currie, in the office with Katie.  He was clutching a straight-edged razor in one hand and a pair of scissors in the other. Currie, a short, rotund man weighing well over 200 pounds, was screaming at Katie and stabbing at her face even as she was engulfed in flames.

The NP rushed in and attempted to help Katie put out the flames and get away from Currie. Both the NP and Katie fell to the floor while struggling with Currie, who continued to stab at Katie while putting his foot on her neck and hollering incomprehensibly.

A Doctor from a neighboring office heard the commotion and rushed to assist. She and the NP struggled to restrain Currie, who continued to stab at Katie. Even with Katie’s two heroic female co-workers fighting him, Currie was hell-bent on continuing his assault as Katie lay smoldering on the floor.

Currie was finally restrained by a Non-Commissioned Officer who was also among the first to respond to the commotion.

Several of the people who were immediately on the scene of the attack in the hospital reported that they could hear Katie screaming,

“I told you this would happen!”

When a fireman commented that the smell might indicate that Katie had been chemically burned, Currie shouted out,

And as Clifford Currie was being arrested shortly after by the Leavenworth Military Police, he was coherent enough to insist that he needed psychiatric help and wanted to speak to a lawyer.

This tragedy was altogether preventable.  Prior to the attack, Clifford Currie gave every overt indication that he was a threat to Katie.

Multiple witnesses and coworkers reinforced the fact that Katie felt unsafe around Currie. He had a history of threatening behavior towards her and towards his patients, and Katie requested to have another co-worker present for any and every dealing she had with him. For most of the thirteen months that she worked with Currie, she tried to have him disciplined or removed before his disturbing behavior would eventually escalate to her attempted murder.

Katie was Currie’s immediate supervisor, and she wrote over twenty negative counseling statements for Currie stemming from his consistently abysmal work performance, complaints directly from patients, and his outright negligence in performing his role as the Exceptional Family Member Program Care Coordinator. Katie repeatedly communicated to her command that she felt unsafe with Currie at work, and she felt untrained to deal with his combative attitude and escalating threats.

Currie overtly threatened Katie on multiple occasions prior to the September 7, 2016, attack.

One such incident occurred immediately after she returned from maternity leave in January of 2016, following the birth of her third son. Currie saw Katie doing paperwork. He aggressively thrust himself within inches of her face, and screamed,

Katie was forced to call a “Code Green” in order for hospital security to stop Currie’s tirade. (Code Green stands for, “A Combative person using physical force, who may be armed.”)

Currie left the hospital campus immediately following this episode, but Katie’s Section Chief (First Line Supervisor) refused to support Katie in her pursuit to discipline or even to counsel Currie after the incident—insisting it “wasn’t a big deal.”

Currie continued to demonstrate a pattern of unpredictable, unhinged, and threatening behavior.

Meanwhile, Currie was vocal about his contempt for Katie as his supervisor and as a woman who intended to have a family; and he appeared emboldened by the lack of disciplinary action.

Katie did not feel safe at work.

She told her Section Chief this numerous times—nothing was done.

When Katie’s initial Section Chief transferred from Leavenworth, her new Section Chief took Katie’s pleas for help seriously. She endeavored to stop Currie before he escalated by going to the next Officer in the Chain of Command. But this Section Chief’s effort to put a stop to Currie’s behavior using the proper protocol was met with an admonishment that both she and Katie were acting irrationally as women and needed to come with facts—and not emotions.

This bureaucratic lack of action paved the way for Clifford Currie, a member of the American Federation of Government Employees Union which supplies civilian personnel to Munson Army Health Center, to attempt to carry out the murder of 1LT Katie Ann Blanchard.

Katie’s intellect, persistence, and resolve, combined with the heroics of her coworkers, are the only reasons she survived this malicious attack. But in her recovery, Katie’s trials continue as she now navigates the military’s own brand of red tape.

This facility is touted as the leading domicile for wounded Soldiers, yet the climate at the WTU is anything but nurturing for this survivor of a vicious attempted murder.

As a family, Katie and her husband, also an active-duty Officer, decided their three young sons, ages 6, 2, and 1, should live with Katie on post in San Antonio during her care at the Warrior Transition Unit. Separating Katie from her boys during her recovery was not an option. The couple came to this critical decision with the personal assurances of Katie’s care team that Katie and her boys had their full support. With Katie’s extensive burn injuries and rigorous medical schedule, in-home childcare is a necessity. 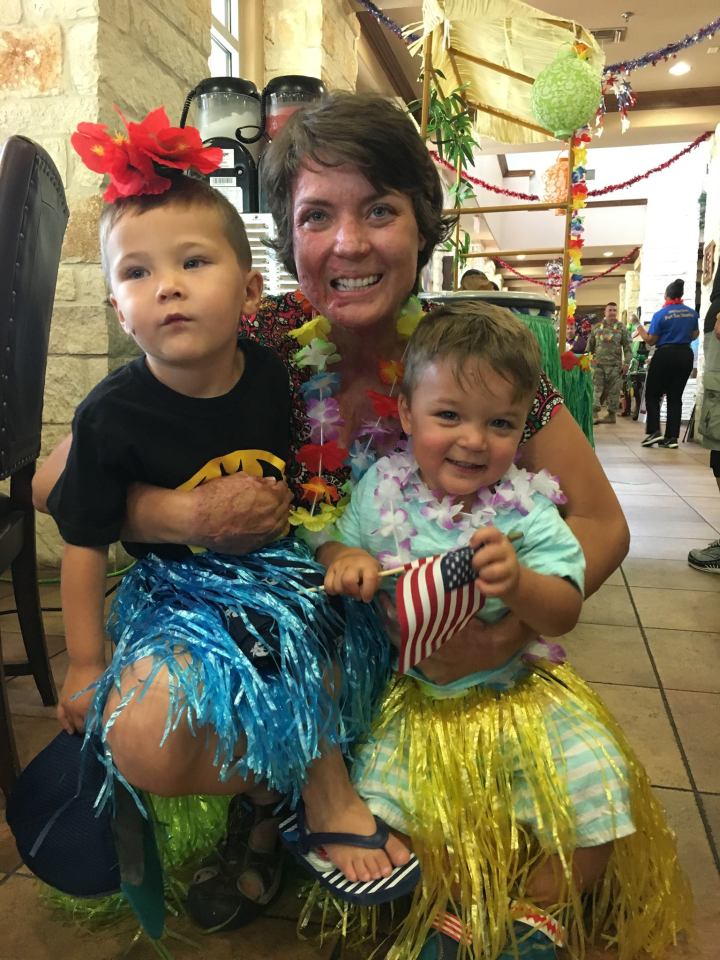 Under normal circumstances when a Soldier is catastrophically injured as Katie was, a benefit called TSGLI (Traumatic Injury Coverage) is almost immediately awarded to cover personal expenses such as travel and childcare. This benefit is a part of military life insurance (SGLI), the premiums for which are automatically deducted from each paycheck. This policy is intended to help relieve any financial burden a Soldier might encounter when recovering from injury.

Katie’s application to receive this benefit was first submitted by her burn doctor at the University of Kansas in September of 2016, immediately after the attempted murder. But Katie’s doctor was told the application was rejected because only one staffer was authorized to process the application, and that person was “unavailable.” In subsequent follow-ups, Katie, her family members, and her medical team were repeatedly told that they had to “just catch” that single person who could process her TSGLI application– and that appointments with that person were not available.

In November of 2016, Katie’s application was finally accepted, but it was then somehow “lost” until February 2017.  As of this writing (July 2017) Katie has yet to receive her TSGLI.

Katie requested a second opinion for the treatment of her facial burns, and was accepted as a into Operation Mend, out of UCLA in California–  a program that regularly works with severely injured service-members. Katie was offered a free evaluation (and potentially specialized treatment) through this program, at no cost to the Army, and with the enthusiastic approval of her medical team in San Antonio. When the time came for Katie’s command to sign off on this however, they administratively blocked her from the program with no explanation.

Because of the military’s continual failure to pay out the benefit Katie has earned and paid for, Katie pays for in-home childcare out of pocket– a massive expense that is absolutely necessary for her and her family’s well-being. Katie is allowed to drop her boys off at on-post group daycare when her in-home help cannot accommodate her medical schedule; however, on-post daycare hours and availability are limited and end mid-afternoon.

With over 20% of her body burned in the attack, Katie understandably experiences Post Traumatic Stress symptoms including memory loss, which can inhibit her ability to perform tasks necessary for the care of her children and herself. In-home help is a necessity. While the Army won’t help finance Katie’s in-home daycare, and her TSGLI application remains in limbo, Katie has relied heavily on a Non-Medical Attendant (NMA). Having an NMA is crucial for Katie’s continuing recovery—which includes at-home physical therapy, post-surgical care (for numerous surgeries she’s had and will have in the future), and everyday tasks that require assistance due to the extensive burns on her arms, hands and face.

To add to her difficulties, Katie was recently informed by her medical team that unless she agrees to wear compression garments (thick, restrictive garments) 23 hour a day, in the 100 degree plus heat of San Antonio, she will lose her Non-Medical Attendant. Being forced to wear these garments makes outdoor activities with her three boys as well as riding her horse—Katie’s only therapeutic reprieve–impossible. 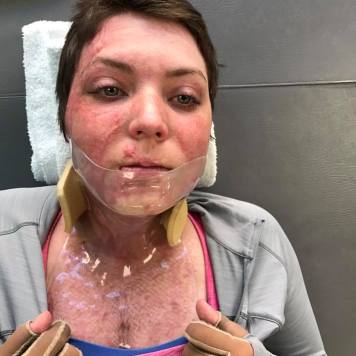 Additionally, Katie has been denied access to her Warrior Transition Unit Multi-Disciplinary Meetings; and she was informed that the Army’s “interpretation of Brooks Army Medical patient rights and HIPPA laws,” meant that she can be excluded from any discussions about her own care—with the exception of a ten-minute period at the end of these meetings when she is to be briefed on what was discussed.

The members of the very unit set up to take care of Katie and other Wounded Warriors have also taken a decidedly adversarial attitude that includes giving Katie unsolicited advice about possibly “losing” her medical retirement and submitting ambiguous and nonsensical counseling statements for “violations” like missing one appointment (in hundreds) after a scheduling error–despite the fact that Katie immediately called when she was notified about the mistake. She was also written up for driving–in spite of being medically cleared to do so by her doctor. 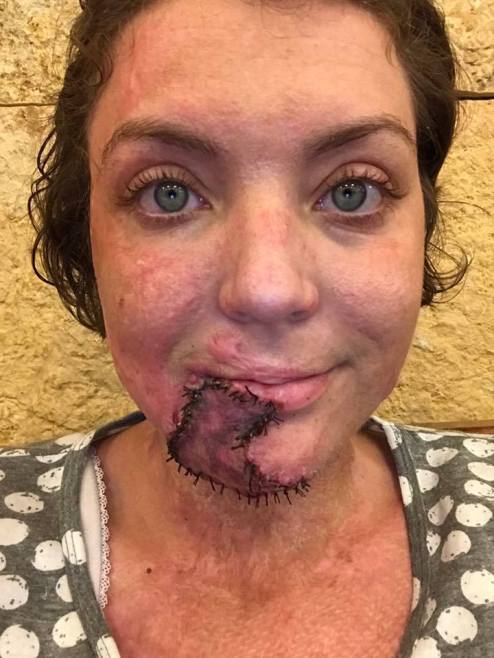 Too many of the military’s actions and inactions have led to 1LT Katie Ann Blanchard’s life being further damaged even after Clifford Currie mutilated her on September 7, 2016.

The repeated and inexcusable failure of Katie’s immediate command element to first listen to and then to care for this Soldier—both at Munson Army Health Center in Leavenworth, Kansas and presently at the Warrior Transition Unit in San Antonio, Texas— has allowed for grievous injury upon this innocent woman.

1LT Katie Ann Blanchard, United State’s Army Nurse Corps, will forever look in the mirror and be reminded of the criminal incompetence of the individual members of her toxic command climate who allowed the attack to happen. Clifford Currie was found guilty this week in Federal Court of Assault with Intent to Commit Murder. Yet, the U.S. Army’s gross negligence concerning 1LT Blanchard’s healthcare and personal welfare inexplicably continues to-date at the WTU.

1LT Katie Blanchard was enthusiastically following in the footsteps of her mother, also an active-duty Army Nurse.  Despite her trials of the last year, and the perpetual pain she suffers, Katie’s passion for nursing remains intact. She plans to return to the care of others when her own recovery is complete. She believes her current challenges are simply a brief interruption in her lifelong career of service in the medical field.

But the Army which Katie so faithfully serves continues failing to serve her.

1LT Katie Ann Blanchard deserves to have her story told. Please support her by sharing this article, and by following Katie’s recovery at https://www.facebook.com/KatieAnnBlanchard.

Disclaimer: The views and opinions expressed in this article are those of the authors and do not necessarily reflect the official policy or position of any agency of the U.S. government. Examples of analysis performed within this article are only examples. Assumptions made within the analysis are not reflective of the position of any U.S. government entity.

This is a text widget, which allows you to add text or HTML to your sidebar. You can use them to display text, links, images, HTML, or a combination of these. Edit them in the Widget section of the Customizer.